Lord Krishna: Inspiring to Be Narayan (Soul) from Nara (Human) - The Essence of Bhagavad Gita

Lord Krishna or Shri Krishna is most often worshipped in the forms of:

Beyond the above-mentioned forms, Param Pujya Dadashri explained that Lord Krishna was a manifested God living in continuous awareness and an exalted Self-realized stage; He was a Vasudeva Narayan, a Yogeshwar, and one of the 63 Shalaka Purusha (one with super-human abilities and achievements).

The Essence of the Bhagavad Gita

As Arjun’s guide on the Mahabharata battlefield, it was Lord Krishna’s duty to address his (Arjun's) despondency. In order to do so, the Lord began by revealing His true, divine Self: "Arjun, you have known Me for a long time, yet you haven't known Me in the true sense. What you see before you is My physical body, not the true Self. I am separate from this body. I am Atma (the Self).”

Param Pujya Dadashri elaborated that, “Lord Krishna said, ‘The ‘material’ within is precisely what I am - that actually is Krishna.’ You will find what you are searching for if you recognize Him (beyond the “packing” of the body). The entire inner intent of Shri Krishna is contained within these two words (material and packing).”

Using the subject of death to further illustrate this, Param Pujya Dadashri explained that what departs at the time of death is the inner “material” (Atma, or the Self), and what remains behind is the discarded “packing” of the body. While Lord Krishna’s “packing” was of Vasudeva Narayan, there are infinite varieties of packing for the living beings of the world – plant-forms, animal-forms, the human-form, etc.

Remain in the Awareness of the Self Within All

Guiding further, Lord Krishna enlightened Arjun with the knowledge of the Self existing within Him, and within all living beings – including those he (Arjun) must now face in battle.

"Just as I am Atma (the Self), you too are Atma. The brothers, uncles, teachers, and friends whom you are facing in the battle are also Atma.”

Shri Krishna continued, “Arjun, this battle is your karmic destiny, and you must carry it out with the awareness of the Atma within all. If you remain in this awareness and fight the war, you will not bind any new karma and your remaining karmas will exhaust. This will lead to ultimate salvation."

Who is the "I" in the Bhagavad Gita?

“In the ‘Gita’, it is said, ‘Whenever the Earth becomes heavily burdened with demerit karmas, I will take birth.’ Who is this ‘I’?”

Param Pujya Dadashri explained that, “That ‘I’ refers to the real Self. It is a principle that when there is an increase of demerit karmas on Earth, a Great Being will take birth. In this way, in every yuga (time cycle), a Great Being is born.”

It is said that, “The real Self is the Absolute Self.” What does that mean? Is the real Self Lord Krishna?

What is the Sudarshan Chakra?

Param Pujya Dadashri described that the Sudarshan Chakra (the circular spinning weapon depicted on Lord Krishna’s right index finger) represents the Lord’s Samyak Darshan (Self Realization, or the vision that “I am the Self”), which He had obtained from Tirthankara Lord Neminath.

What Does Naishthik Brahmachari Mean?

Param Pujya Dadashri explained that, even though Lord Krishna had more than 16,000 queens and lived a rich palatial life, He was actually a “Naishthik Brahmachari” (one with an unwavering inner intent of celibacy).

He further explained that, “(Naishthik Brahmachari) describes One in whom there is the constant inner intent, devotion, and sincerity towards celibacy. His discharging karma may be of non-celibacy, but His charging karma is of absolute, pure, and continuous celibacy.”

How is Brahma Sambandha Established?

“A Gnani Purush removes your devotion to the world, places that devotion in Brahma (the Self), and makes you Brahmanishtha (established in the Self).

When one does not forget the Lord Within even for an instant, that state is called Brahma Sambandha.”

Param Pujya Dadashri described, “Lord Krishna said, ‘Dharma (religion) of the Self is Svadharma, while activities such as fasting or penance are of the non-self - there is nothing of the Self in them.”

When questioned about the different forms in which Shri Krishna may be worshipped, Param Pujya Dadashri recommended the worship of Bal Krishna statue to those who desire worldly benefit. To those desirous of moksha (liberation from the cycles of birth and death), He recommended worshipping the Self-knowledge expounded by Yogeshwara Krishna in the Bhagavad Gita.

Param Pujya Dadashri further explained that, “When a person devotes himself to a murti (idol), he remains the idol - the formed non-self complex; when a person devotes himself to the Amurta (formless), he attains the formless Self and becomes liberated. Shree Krishna said, ‘You actually are Lord Krishna (the Paramatma).’ But how will this be understood unless you have attained the knowledge of the Self?”

Param Pujya Dadashri concluded by saying, “You need the religion of Yogeshwar Krishna; it is a temple of Gnan (Self-knowledge). Lord Krishna was a Gnani (embodiment of Self-knowledge). He became enlightened. He became a Gnani Purush (Narayan) from an ordinary human being (nara).”

Additional Forms of Lord Krishna represented in the Trimandir, are: 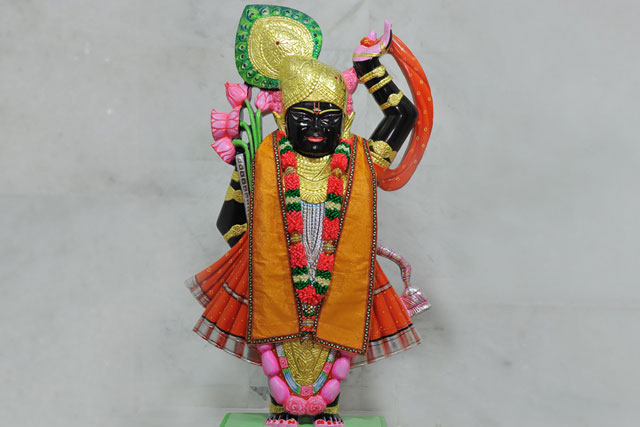 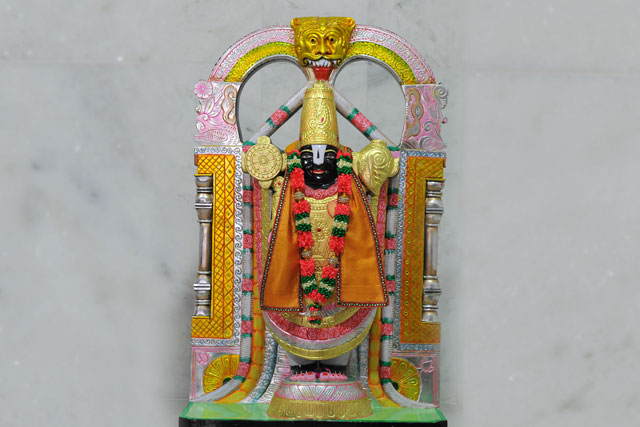 Festivals that are celebrated annually in the Trimandir are: