The Trimandirs, non-sectarian temples, are mostly owned and operated by Shree Simandhar Swami Aradhana Trust. The Trust and its associated charitable entities, including Dada Bhagwan Foundation (DBF), all non-profit spiritual organizations, undertake a broad range of activities related to their mission to fulfill the spiritual Vision of Gnani Purush Dada Bhagwan, the founder of Akram Vignan (Science of Self Realization). His two-fold Vision is that:

In order to fulfill the aforementioned Vision, the Trust runs and operates the Trimandirs.

A major component of this mission is the creation of non-sectarian temples (Trimandirs), as Spiritual Master Dada Bhagwan had proclaimed these “Three-in-One” Temples to be “Our symbol for the salvation of the world.” 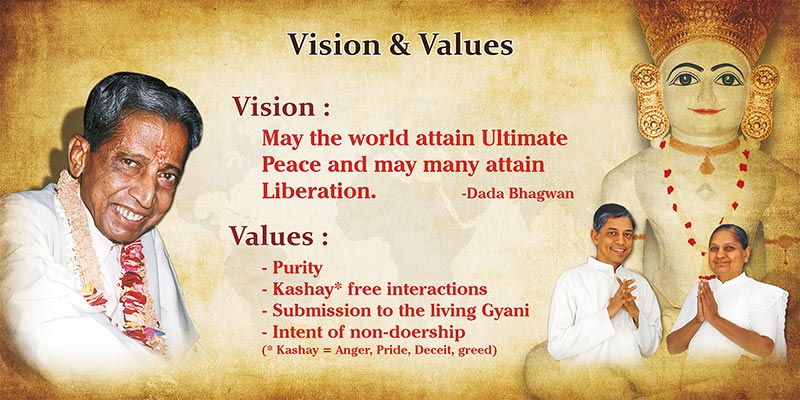 Explaining the intent behind Trimandir’s creation, Param Pujya Dadashri said, “Instead of pursuing Moksha (liberation) or Atma (the Self), people have become involved in religious matbhed (separation caused by difference of opinions). Trimandir (non-sectarian temples) are intended to shatter matbhed.”

Param Pujya Dadashri proposed Trimandir to honor Gods of Jainism, Shaivism, and Vaishnavism (along with Gods and Goddesses from other religions) with equal reverence on the same platform. He envisioned this design to offer the visitors nishpakshpati darshan (unbiased devotional viewing), thus, automatically cleansing them of matbhed bhaav (religiously divisive intent).

Param Pujya Dadashri dreamed of a time when 24 large Trimandirs would be constructed. His dream is being realised with many Trimandirs already completed, and numerous further such temples planned or in process.

Param Pujya Dadashri predicted that Trimandir’s darshan would free its visitors from suffering and worries, and offer them access to Atma Gnan (Self Realization) and Moksha. Numerous such benefits have been reported by the regular visitors of these non-sectarian temples located in different places in India.

Shree Simandhar Swami Aradhana Trust and its associated charitable entities organize Pujya Deepakbhai’s satsangs (spiritual discourses) and Gnan Vidhis (Self Realization ceremonies) across India and throughout the world. All Trimandirs and all Satsang and Gnan Vidhi programs are free of cost and open to all.